When most people envision SWAT officers and armored police vehicles, they associate those images with major crimes, dangerous criminals, and violent riots. However, this article shows how one police department found an additional use. When Hurricane Irma slammed into the southern United States in 2017, Coral Springs Police Department in Florida demonstrated the value of these specialists and tools in emergency response.

Preparing for a major hurricane is a huge undertaking for many police departments around the globe. The Coral Springs, Florida, Police Department (CSPD) has a full-time emergency management coordinator, volumes of policies and procedures, and numerous personnel with practical experience dealing with storms. As each hurricane gets closer, CSPD and the city of Coral Springs progressively increase their levels of alert, and the hurricane response is planned using industry standards and best practices.

CSPD consists of approximately 205 sworn officers and about 100 civilian employees. CSPD provides full law enforcement services to 130,000 full-time residents in an area that is roughly 24 square miles and approximately 15 miles from the Atlantic Ocean coastline.

The CSPD SWAT team is composed of 20 operators, 4 snipers, 7 medics, and 6 crisis negotiators. Coral Springs SWAT is a part-time assignment and is considered an additional responsibility.

CSPD acquired its armored vehicle–the Lenco Bearcat—in 2009. Most in the SWAT and tactical community recognize the traditional uses of the armored vehicle, and CSPD uses it on almost every SWAT operation, as well as operating it for other jurisdictions during mutual aid scenarios.

Coral Springs (and much of South Florida) was crushed by Hurricane Wilma in 2005, and CSPD learned many lessons from that storm. The agency was frustrated that it could not respond to emergencies when it became too dangerous due to severe wind, rain, and debris. Additionally, damage assessment and potential rescues immediately after the storm were challenging due to impassable roads. CSPD did not have an emergency vehicle capable of responding to priority missions in 2005. However, as the 2017 hurricane season commenced, command staff reasoned the Bearcat could now be a game changer.

As Hurricane Irma approached South Florida, it’s intensity reached as high as a catastrophic Category 5 storm with sustained winds of over 200 mph. The City of Coral Springs enacted all of its emergency procedures, including a recall of all essential employees, activation of the Emergency Operation Center (EOC), and implementation of 12-hour shifts. CSPD also decided to staff the Bearcat with two SWAT officers and two SWAT medics to respond to priority calls during the storm.

The SWAT medics assigned to the armored vehicle were full-time Coral Springs Fire Department (CSFD) lieutenants, with SWAT as an additional responsibility. The police officers assigned to the Bearcat were a sergeant and detective who were both members of the CSPD Crimes Against Persons Unit. The four SWAT members train together twice a month and have been on many SWAT operations together. CSPD and CSFD believe that a blended team of law enforcement and fire rescue personnel has the flexibility and breadth of skills to handle most emergency situations that are likely to arise during and immediately following a major hurricane.

At 16,000 lbs. before equipment, the Bearcat is able to withstand hurricane-force winds. The armored vehicle also has a winch and the ability to push or pull debris that might obstruct ingress or egress on the roads. The biggest threat was exiting the vehicle; the team would be vulnerable to flying debris, downed power lines, and falling branches or trees. Ultimately, the team would have to make the call when or if it became too dangerous to respond or exit the vehicle.

The first call for the team was at 4:30 a.m.—the commander requested the team transport a city engineer to a shelter to evaluate an issue with a generator.

After that call, it was a whirlwind of activity for the team. As the storm worsened, the team went to an apartment where an elderly female had recently died of natural causes. The team assisted patrol with the investigation, notified next of kin, and transported the deceased to a temporary morgue at the hospital, as the funeral home was not operational during the storm. The team also responded to a medical situation in the north end of Coral Springs. The medics checked on the condition of the patient. They determined that it was not an emergency, and the patient should stay at home until the storm passed. Shortly thereafter, the team carried a man who was having a cardiac episode down a flight of stairs in the storm and got him to the hospital. They also rescued a family of three and their dog, after a huge tree crashed through their roof. The sky was visible from inside the residence.

After dropping the family and their dog at the shelter, the team rushed to a call for a woman who was going into labor. At this point, the Bearcat was one of the only vehicles on the road in the tri-county area. The team was discussing emergency medical protocols for births while the driver was literally dodging falling trees, signs, and flying debris. They had to travel in both lanes of traffic, on medians, and sidewalks.

Upon their arrival, the team observed a Coral Springs Fire Department Chevy Suburban already on scene. An assistant fire chief and driver-engineer had also responded to this call from a nearby fire station.

As the team entered the house, the SWAT medics split up—one helping the baby and one helping the mother. Both were doing well. It was quickly decided that the best course of action was to transport them to the hospital before delivering the afterbirth. The CFPD’s Suburban was not a safe method for transporting the mother and her baby in the torrential rain and gusting winds. However, an armored vehicle could handle those conditions. 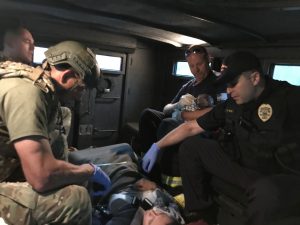 One of the most difficult parts of the day was safely getting the mother and her newborn from the house into the armored vehicle It was incredibly slippery and windy, and the team had a relatively unstable load on the backboard. They doubled up on the backboard and were able to safely get the mother into the Bearcat, while the CFPD engineer carried the baby into the vehicle.

The team carefully made their way back to the hospital. The wind and rain had little to no effect on the Bearcat. They notified the hospital and let them know the new mother and baby were on the way. The hospital was fully staffed and had not received new patients for several hours, so when the Bearcat pulled into the ambulance drop off bay, it looked like every doctor, nurse, and staff member was there to greet them. The team of doctors and nurses rushed the mom and her daughter into the hospital and provided medical care for both. The crew later announced both mom and her baby were perfectly healthy. As the storm progressed, the team handled several more calls late into the evening: a domestic violence incident, suspicious people looking into parked cars near a shelter, and a cancer patient who needed immediate hospitalization. As the storm weakened, the city was then able to start patrol and fire units to handle priority calls, and the Bearcat Team was finally able to stand down after more than 15 hours of emergency response. Coral Springs and most of Broward County was spared total devastation from Hurricane Irma. Many lost power for extended periods of time, but very few in Coral Springs sustained significant damage.

SWAT sergeant Scott Myers debriefed the commanders in the EOC, and soon after, the team was being interviewed by media outlets. Their efforts had brought a great deal of positive attention to CSPD.

Overall, using an armored vehicle for emergency calls during a hurricane was hugely successful. However, as the day progressed, the team constantly tweaked things and, as with every operation, several lessons were learned, including the following:

• Two officers and two medics are good, but, if staffing allows, three officers and two medics would be better. One issue the team dealt with was leaving the Bearcat unattended. It takes time to secure each door and then unsecure each door, and the vehicle does not have automatic locks. Leaving a fifth member in the vehicle while the other team members handle the call would be more efficient.

• Using tactical officers and medics that work and train together was a significant element of the operation’s success. Teamwork and trust in these dangerous conditions were just as important as skills and experience.

• The CSPD Bearcat, like many agencies’ armored vehicles, is not configured like an ambulance. SWAT typically has it pre-set for tactical operations with ballistic shields, tactical equipment and extra ammunition, which were eventually replaced during the storm with emergency equipment. When deploying an armored vehicle for emergency response, equipment such as backboards, a chainsaw, fuel, gloves, medical supplies, beverages, and extra batteries for radios and phones are more useful.

• Consider lining the back of an emergency armored vehicle with a tarp or something similar that is easily disposable if it is contaminated from bodily fluids. (And bring a few extra ones.)

• While SWAT gear is appropriate for all SWAT missions, it might have been overkill for some of the hurricane operations. Having armor with the personnel for use on law-enforcement calls (e.g., domestic violence) is important, but wearing lighter, non-ballistic helmets (rappel style) and eye protection the rest of the time would be appropriate.

• The Bearcat had no issues with wind gusts up to 115 mph, but the team had to be careful not to get it stuck, staying on roadways whenever possible. Researching the top safe wind speed for an agency’s armored vehicle model is recommended.