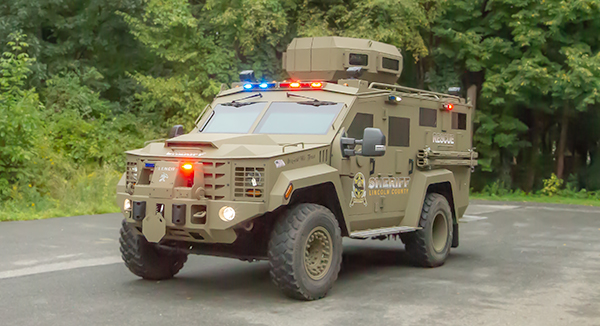 Now, they have a new tool that will better protect them.

Sheriff Jeff Jaeger says the Sheriff’s Office has wanted a BearCat for quite some time.

“The motivator was the recent events over the last couple years, the unfortunate events we’ve had,” said Jaeger.

Those events include officer-involved deaths, including the death of Everest Metro Detective Jason Weiland.

The sides and the main body of the BearCat are made from half inch steel, and the vehicle can withstand impacts up to .50 caliber round.

Not only does the vehicle provide protection for officers, it also provides a certain amount of intimidation.

“The individual that is causing a dangerous situation generally gives up because they understand they aren’t going to defeat this vehicle,” said Jaeger.

This particular BearCat is top of the line and was shown off at a conference this weekend in Milwaukee before officers drove it up to Merrill.

The vehicle cost $297,000, all of which was donated by the Bierman Family Foundation.

“Community support for law enforcement and for our agency has just been terrific,” said Bierman.

Thanks to that support, the Lincoln County Sheriff’s Office will now be able to better serve that community when they need it most.

Another feature of the BearCat is it’s off-road ability. It will be able to go through snow when other vehicles cannot.