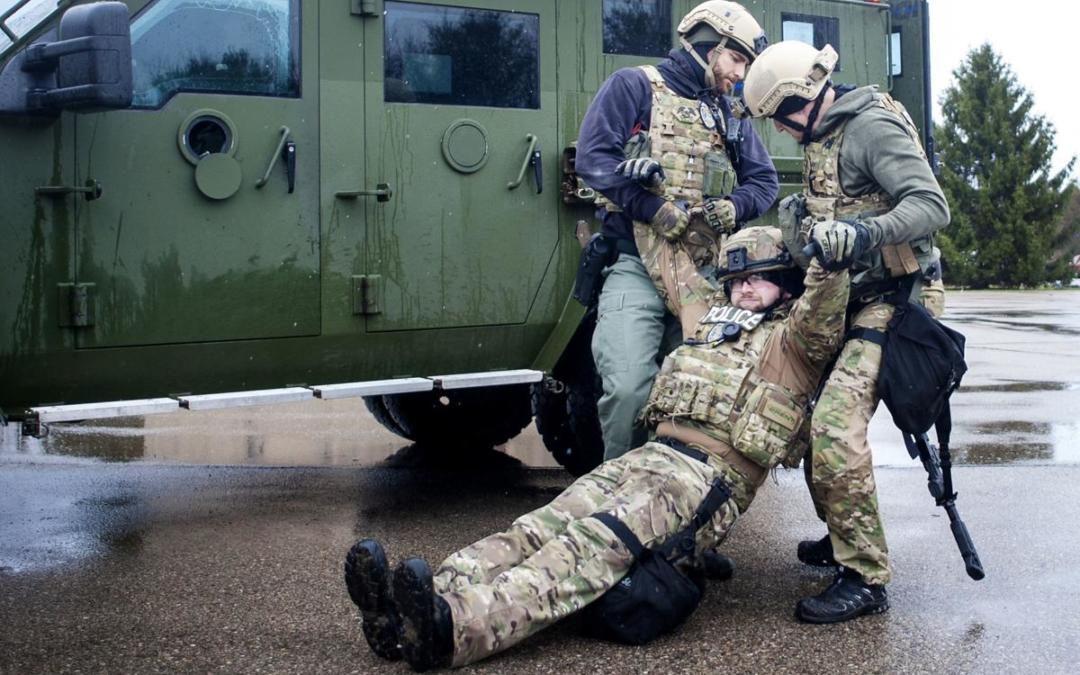 JANESVILLE, WI – Like ground troops in a war, Janesville police might someday have to see a fellow officer take a bullet.

When that happens, they’ll be able to rely on Janesville firefighter medics who will be there with them, risking gunfire to patch up officers and treat civilian victims as soon as possible.

Janesville police and firefighters have been training for more than a year to work together in highly dangerous crime scenes, or “hot zones,” something many police and fire departments are not trained to do.

The joint training was just in its infancy April 3, 2018, when police responded to a domestic-violence incident on the city’s south side.

A woman had been shot repeatedly in the leg and was bleeding profusely. Later, police discovered a man in the same house who had been hit in the head with the butt of a shotgun, and a block away, another woman who was bludgeoned with a heavy object.

Officers didn’t know where the gunman was as they entered the house and carried the first woman out. Paramedics also had no idea whether they might come under fire when they went into the “hot zone” to treat her.

“Had those relationships and that confidence and trust in one another not been developed, I don’t think it would have gone that way,” said police Sgt. Mark Ratzlaff.

Instead, police would have carried the gunshot victim to an ambulance waiting around a corner, delaying treatment, Ratzlaff said.

All the firefighters involved in the joint training are certified to deal with injuries under fire and are called Tactical Emergency Medical Support medics.

Police Chief Dave Moore said the idea for the joint operations came from police in Oak Creek, who worked with their fire department to make the change after the 2012 mass shooting at the Sikh Temple.

Six people died in the attack, when police had to help victims leave the temple because firefighters would not go into the hot zone, Moore said.

SWAT officers carry kits with tourniquets and bandages, Ratzlaff said, but: “I would much rather have a paramedic that goes on an ambulance, treating people all day long than one of my SWAT operators that went to a class nine months ago, hasn’t treated anybody in the meantime; now they’re responsible for saving my life.”

The two departments have also trained jointly for active-shooter incidents for the past five years, practicing scenarios in which a police team tracks down the shooter while a second team of police and firefighters enters the building to treat victims who might be bleeding out. That’s rather than wait until the shooter is “neutralized,” which was the old procedure, Ratzlaff said.

“In the meantime, people are bleeding out and dying. Like, why are we letting that happen?” Ratzlaff said.

All Janesville firefighters carry ballistic helmets and bullet-resistant vests in their vehicles so they can enter an active-shooter situation.

During a joint training exercise Wednesday at the fire department’s training center on County F, police officers and firefighter/paramedics drove a Bearcat armored car to a building, where the officers simulated breaking in and having one of their members injured.

Officers carried the injured officer back to the Bearcat, where two firefighter/paramedics waited to treat him.

“It’s muscle memory. It’s repetition. We want to get as close to reality as we can and do it how we would do it on the street,” Herget said.

The repetition helps police and firefighters work out the little things that could save time in an emergency, such as where each person sits and where the equipment goes in the armored car so no one trips and there’s room to treat someone, Ratzlaff said.

Training also helps them refine every little move. For example, they decided that when the SWAT team leaves the back of the Bearcat, one of the medics will close the doors to keep them safe from gunfire.

Eventually, two paramedics will enter buildings with SWAT officers so they can begin treatment even sooner, Ratzlaff said.

But training has not yet advanced to that level, especially because of a number of new team members, Ratzlaff said.

Ratzlaff said he often hears from police in other cities who say they don’t have the level of cooperation that Janesville officers have with their local firefighters and with the Department of Public Works, when barricades are needed, for example.

Herget and Ratzlaff seemed enthused by the joint training and the things they were learning from each other.

“They’ve been a great asset to us,” Ratzlaff said.