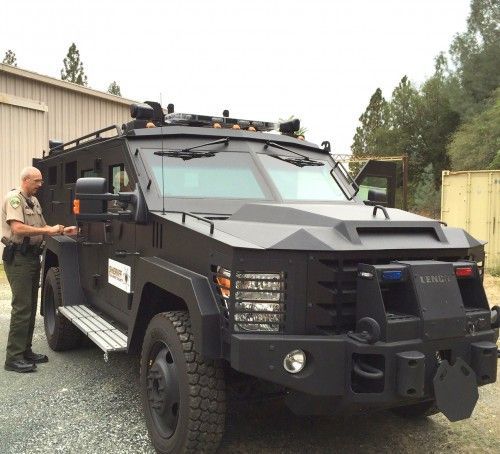 It is not difficult to make a case for having such state-of-the-art wheels handy after touring the department’s new equipment under the charge of Lt. Neil Evans, who points out that when the county SWAT team previously needed an armored vehicle for a high-risk maneuver, it would call on the Calaveras County Sheriff’s Dept., which has one.

As Lt. Evans lists the kinds of scenarios under which this new resource will prove valuable, those who follow the news will quickly realize that a number of these have locally occurred in recent memory: high-risk warrant searches where the subject or subjects are wanted for violent crimes and may have weapons; barricade situations in which a subject is claiming to be attempting suicide or is holding one or more hostages; lockdowns; and shoot out incidents, such as the one that occurred last fall in downtown Sonora where a subject opened fire twice on law enforcement officials and passersby, hitting two before deputies killed him.

According to Lt. Evans, the MedCat has been in-house since last month. While it has been the intention of the sheriff’s department to obtain a SWAT vehicle for several years, as previously reported, it has also taken a significant amount of time to figure out just how to appropriately fund it within the county’s and sheriff’s budgetary systems. Priced at $340,000, the unit was purchased in California for under $280,000 as a demonstration model from its Massachusetts-based manufacturer, which would have had to pay $20,000 just to ship it back east. Drug dealer assets forfeiture sales as well as Homeland Security and CalOES grants were among the monies tapped for the transaction. Although Evans makes a point to note that taxpayer dollars were spent they did not come from the general fund. While still an expensive price tag he adds the purchase can be depreciated over the 30 years of its expected life, and that, as the vehicle is built on a Ford F450 platform, its engine and chassis can be serviced locally.

Within days after its pick up, Evans shares that the MedCat and its SWAT team members were dispatched to Copperopolis as part of a large multi-agency task force out of Stockton that served over two dozen search warrants between there and Calaveras County that day. The subject in Copperopolis was a gang member wanted on multiple homicides. While Evans gladly recalls that the task force experienced a surprisingly subdued day on that outing, he states it could have gone very differently.

A tour of the MedCat confirms its impressive protective assets. Built with solid steel walls and two-inch thick bulletproof glass, it boasts a 360-degree rotating turret shield, eight gunports, battering rams, bomb-sniffing apparatus and a public-address system that allows for negotiating with barricaded subjects at close proximity. Set up inside much like an ambulance with oxygen bottles and illuminated by overhead and spidering medical lights, it offers two places for stretchers, providing the means to treat injured persons in the field and transport them from hot zones to medevac helicopters and hospitals. Sized for agile maneuvering along the local rural roads, the vehicle is also equipped with a heavy-duty diesel engine and four-wheel drive. However, weighing in at around 17,500 pounds, or roughly eight and three-quarter tons, it is not a viable choice for heavy snow.