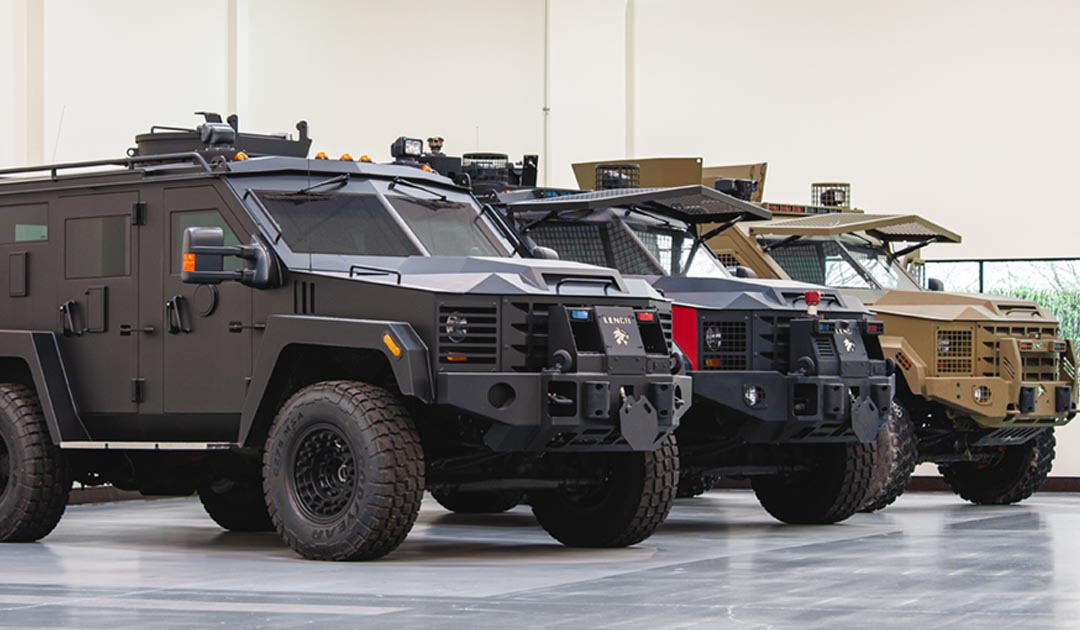 A major milestone is quickly approaching—on February 20, Lenco Armored Vehicles will celebrate its 40th anniversary. It’s hard to believe that four decades have already gone by, but the work we’ve done with each and every one of our clients has made it worthwhile. In honor of this momentous achievement, we invite you to join us in celebrating 40 years of Lenco Armored Vehicles.

We know how fortunate we are to have found such success. According to the United States Bureau of Labor Statistics, approximately 50% of small businesses fail within five years and approximately 66% fail within 10 years. Back in 1981, Lenco began as a small business in the Berkshires supplying commercial armored vehicles to end-users who put their faith in a new company. We’ve come a long way since then, producing more than 6,000 vehicles in over 40 countries around the globe. We’re constantly adding to our fleet of vehicles, engineering new BearCat models and model variants as needs arise.

“We are proud to say we’ve now been manufacturing armored vehicles that have protected security personnel, first responders and military for four decades,” said Lenny Light, vice president of Lenco. “We will continue our mission to provide armored vehicles for the men and women who put their lives on the line to protect us each and every day.”

Celebrating 40 Years, Thanks to our Customers

In anticipation of our 40th anniversary, we reached out to our customers to find out what their Lenco vehicle means to them. Here are some of the responses we received:

Captain Mark Knight of the Washington County Sheriff’s Office and Washington County Special Response Team (WCSRT) first acquired a BearCat G2 in 2006. In 2007, his team responded to a shooting in which the suspect had already killed two people and was barricaded inside his vehicle with firearms. The suspect fired at the BearCat several times with a shotgun, but the glass in the window remained intact. Eventually, the responding officers disabled the vehicle using their BearCat.

“The first thing I did after the incident was call [Lenco]. What an amazing vehicle. It [the BearCat] saved the lives of police officers that day,” said Captain Knight. “We can protect the citizens of Washington County because we have this truck. It’s a tool in our toolbox. Without it, things could have been a whole lot worse.”

In early 2020 Captain Knight turned to Lenco yet again to buy a second BearCat.

Captain Rod Schaeffer has been a fan of Lenco since he first saw the Lee’s Summit Police Department’s BearCat, one of the first BearCats in production. The vehicle safely transported officers to the scenes of multiple shootings over the years and allowed officers and civilians to remain unharmed.

“In 2003, we responded to an active shooter situation. [They] tell you that the BearCat fits 12 operators, and it does,” said Captain Schaeffer. “But that day, we needed to fit in 21. This included operators in full gear and the people we rescued. That’s the real-world operation.”

Pleased with the functionality of their initial purchase, the department invested in a second vehicle in 2015.

“Without a doubt, pairing up the Lenco MedCat and FireCat for any emergency response agency in the U.S. would give that community unprecedented and unparalleled response capabilities, should situations arise.”—Erik Jones, Fire Captain at Las Vegas Fire & Rescue

“[The Lenco] team are very knowledgeable and are able to procure parts and have them shipped in the most cost-effective manner.”—Kevin McCarthy, Project Manager at Bowhead Operations and Maintenance Solutions

Looking to the Future

We’re proud of all that Lenco has been able to accomplish over the last 40 years, and it wouldn’t have been possible without all of our customers. We hope to have you alongside us for the next 40 years and beyond.

If you’re not already working with Lenco, or if you have specific questions about our products, we’d be happy to talk to you. Contact us to learn more.