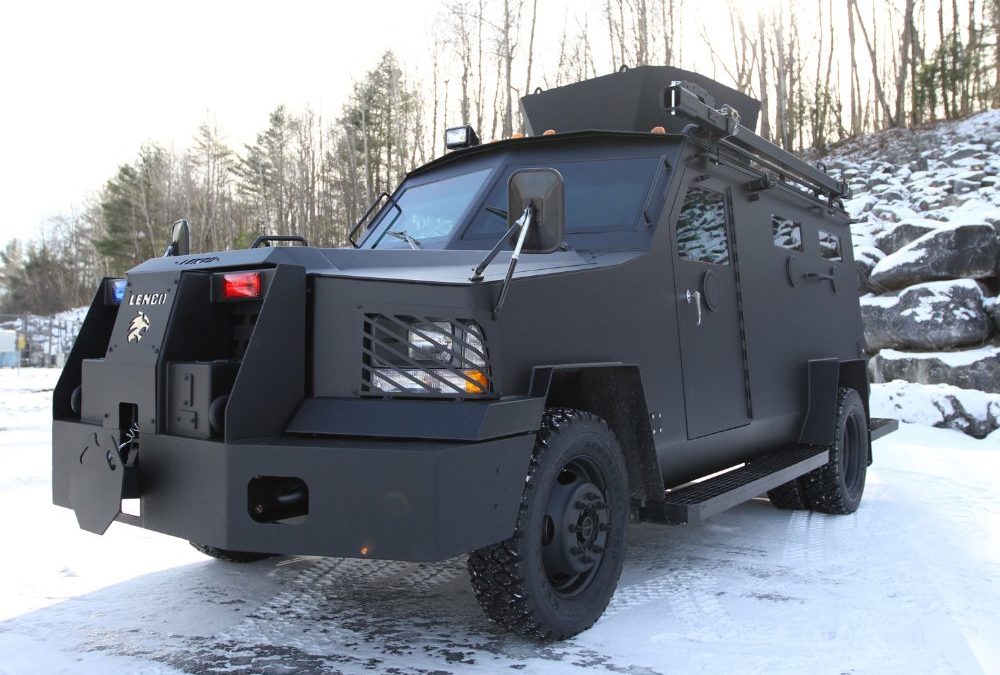 When the Coeur d’Alene Police Department in Idaho sought an armored vehicle, the cost of a new Lenco BearCat was beyond their available budget—but a certified, preowned BearCat was well within reach.

The department determined that it did not require the most current BearCat layout or significant customization, said Capt. David Hagar, who led his department’s purchasing process. Since they could be flexible on their BearCat model and specifications, they contacted Lenco and were matched with a preowned vehicle that would fully meet their needs.

“We just wanted to get a piece of armor to protect our community, and we can work with what we’ve got,” Hagar said.

After finalizing the deal, the agency proudly took possession in June of a refurbished 2004 G1 BearCat in Lusterless Black, with rear A/C, a hydraulic RAM upgrade, and a backup camera. The vehicle price was $169,725.

Numerous factors went into the department’s decision to purchase the BearCat and how to fund it.

Coeur d’Alene is a city of about 57,000 with a police department of 96 sworn officers, which operates a joint SWAT team between the city and the county sheriff’s office.

The city is known as a four-season resort town with water and mountain sports in the summer and snow sports during the winter. It is also one of the fastest growing regions in the United States, Hagar noted, which brings challenges that are likely familiar to other municipalities experiencing growth, including an increasing population, increasing cost of living, increasing demand on the existing infrastructure, and increasing crime.

In addition, as in many growing cities, salaries haven’t kept up with the rising cost of living, so the department is struggling to attract officers, Hagar said. And because of their proximity to Washington state, he added, they are impacted by crime from across the border, including an uptick in gun crimes.

The Coeur d’Alene PD was already sharing one BearCat with the county sheriff’s department through its joint agency SWAT team, but they had reached the point where they needed a dedicated one for their department, Hagar said.

There’s just one other SWAT team in northern Idaho, Hagar explained, and the Coeur d’Alene PD responds to the five different counties of the Idaho panhandle when needed. “We also respond over to Spokane if needed to assist, so there’s a fair amount of distance, and having only one piece of armor in north Idaho was a little bit difficult to do,” he said.

“So that’s where we were coming from,” Hagar added, when they looked at their options.
Compared to raising the full funds for a new BearCat, or working to secure a grant (for which Lenco provides assistance), utilizing Lenco’s used vehicle program was the perfect choice for the Coeur d’Alene PD. It provided the vehicle they needed, at a price they were prepared to pay, on their terms.

Once they made their decision, the department was able to move quickly, from taking their request to the Coeur d’Alene city council last October, to getting approval, awaiting the refurbishment process, and finally taking possession of the vehicle in June.

Hagar had prior experience purchasing armored vehicles, he noted, and found the process smooth. He said he’s known Lenco Sales Manager Jim Massery since his time running a SWAT team at his previous agency. “He’s been a great contact to stay apprised of the preowned program and other programs that Lenco has,” Hagar said. “It was great from the sales standpoint with Jim because we knew what we were looking for, and it was just a simple match.”

Lenco already had a good match that was in the process of being refurbished, and it didn’t take long to get the quote, Hagar said. The only uncertainty was exactly how long the refurbishment would take, but Hagar was able to stay in touch for updates.

Another positive part of the purchasing experience was their tour of the Lenco factory in Pittsfield, Mass., for which Hagar sent a SWAT staff member and a fleet maintenance person. The visit allowed his staff to learn the fine details of the vehicle and ask any questions they had about maintaining it, given its extra weight and special features.

“We all felt really comfortable with the company,” Hagar said. “But being a small municipality, our fleet staff had never worked on a vehicle like that, so we wanted to make sure they were familiar with and had some face-to-face contact with the staff at Lenco in case there were issues that arose later as far as the maintenance.”

The quality of the vehicle and its refurbishment have met all of the department’s expectations, Hagar noted, from its operation to its appearance, which included a fresh paint job and refreshed interior. “It looks new on the inside,” he said. “So, it was exactly what we were looking for.”

The department would have chosen the layout of the newer BearCats if it was in their budget, Hagar conceded. “But at the same time, we paid 180…so we get what we get,” he said. “That’s really the only functional part that’s different from the newer generation.”

They were not concerned with making their own modifications, other than planning to add more emergency lighting and scene lighting, which they would probably do with any model they chose, Hagar said.

Since taking possession of the vehicle, the department has been working through the state’s titling process. When the state wanted more information than what was initially provided, Lenco reached out to work with the state directly to provide the additional paperwork. “I think they’re going above and beyond to help with that,” Hagar said.

Lenco has always been there to offer support, Hagar added. Purchasing an armored vehicle can sometimes become a political issue, he noted, and Lenco provided white papers and success stories from other agencies for the police department to incorporate into their brief to their city council. For them, “It really wasn’t a big issue getting it through, but that was a nice resource to have,” he said.

Though the department was still working through the titling, as a government agency with the purchase on the rolls, it was able to put the vehicle directly into service when it was first needed within about 72 hours of its acquisition, Hagar said.

Feedback from the department has been positive, and Hagar plans to train additional officers beyond the SWAT members. “Being a smaller agency, there may be times I don’t have anybody on SWAT that’s on, so we’re going to be training all our folks on how to operate it,” he said. “And again, I just think it gives peace of mind knowing that we can give a little bit more protection when we go into some of these armed and more dangerous situations.”

After a positive experience, Hagar said they would recommend Lenco’s used vehicle program for any other agency in which the priority is protection at an affordable price, from a brand they can trust.

“I think the biggest thing that Lenco brings to the table is customer service, and just a tried and true product,” Hagar said. “And quite honestly, when it comes down to it, we buy these to protect our cops and our communities. Some of the bells and whistles may be nice for some circumstances, but if I can get a piece of steel between a bullet and my cops, I don’t care if it’s a 1950 Studebaker as long as it can stop bullets.”

About Lenco Armored Vehicles
Since its founding in 1981, Lenco Armored Vehicles has been the most trusted manufacturer of tactical armored security vehicles by law enforcement, fire and rescue and government entities worldwide. The privately held, family-owned and -operated company revolutionized tactical response with the advent of the BEAR® and BearCat®, and since, has designed and fabricated more than 6,000 armored vehicles in service by more than 800 state and federal agencies in all 50 states. Lenco prides itself on protecting defenders around the world and serving as the standard in the industry. For more information about Lenco Armored Vehicles, visit lencoarmor.com