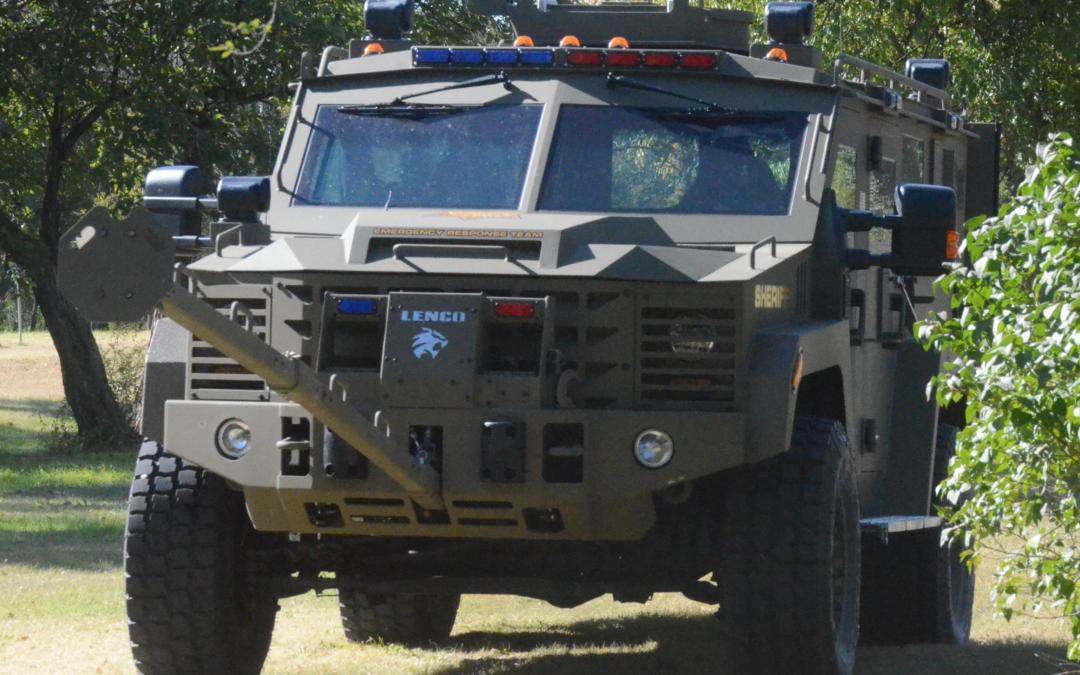 Given the escalation of violent crime over the last few years, the Harvey County Emergency Response Team continues to strive towards a level of preparation that will allow it to best serve the community in any given situation.

In order to do so, there are needs that exist for the team that have to be met, something that was highlighted in a training demonstration held Monday at Camp Hawk.

Capabilities of the team were displayed in multiple scenarios (i.e. hostage rescue, officer down, forced entry, etc.), both in its current iteration and with the added resource of an armored rescue vehicle — available at the regional level through Reno County, but not locally.

Benefits of the armored vehicle versus Harvey County ERT’s current unit — a converted ambulance — were numerous, starting with being more up-to-date, featuring greater safety measures and having increased transport capabilities.

“This type of technology is something we should’ve had 10 years ago,” said ERT commander and Harvey County Sheriff’s Deputy Brandon Huntley. “It’s a life-saving tool; it’s something that keeps my guys safe, that we can rescue citizens in dangerous situations without terribly exposing law enforcement lives to do so.”

Additionally, Harvey County ERT having an armored vehicle would allow the team to meet Federal Emergency Management Agency (FEMA) Type III requirements for emergency response teams. Right now, the Harvey County ERT operates at the Type IV level — and Huntley said the presence of an armored vehicle would immediately bump the team up to Type III, which is the standard level at which ERTs are expected to operate.

Regionally, the teams Harvey County partners with in the south central Kansas region are striving to meet those Type III guidelines. Huntley and other ERT personnel are also expecting that to become a requirement on the national level in the near future, which could impact the funding local and regional teams receive from the Department of Homeland Security. With 14 team members and various equipment needs to meet standards, Huntley pointed out just how critical that funding can be.

Funding received through DHS on a yearly basis is around $700,000 (with 25 percent earmarked for law enforcement-specific projects) for the south central Kansas region. With the expectation that Type III capabilities will become a necessity to get those funds — going to “viable” teams — ERT members in the south central region have already started to shape that policy, something Harvey County Sheriff’s Deputy and ERT member Nate Regier has gotten involved with recently being named the regional representative on the Kansas Law Enforcement Resources Working Group.

With the working group, Regier will help determine what projects the DHS funding goes towards — and what guidelines need to be met in order to receive that funding, allowing the region’s push to meet Type III standards to spread.

“The way that things are going now is just setting us up for success in the future in the region, so I just think it’s great because we can kind of be at the forefront and be the spearhead to get things going in the right direction with FEMA typing and different things like that,” Regier said.

“It’s great to get those things implemented and passed to make the entire region better as a whole and more capable to respond to various crisis incidents,” Huntley said.

Safety remains at the forefront of the Harvey County’ ERT’s push to meet standards and acquire resources to do so — though that safety does come with a cost. While the price of an armored vehicle like the one (a Lenco BearCat) utilized Monday starts at $240,000, Huntley and Sheriff Chad Gay said both the Friends of the ERT and sheriff’s office have talked about efforts to put a combined $100,000 towards the total cost of the vehicle to help offset the cost to taxpayers.

Commission chair Randy Hague saw the value in such a resource, noting the need of an armored vehicle is a product of the times — with another violent crime in the area all but a likelihood.

“It’s not a matter of if it’s going to happen again, it’s when,” Hague said.

Huntley also pointed out a recent attempted burglary in rural Hesston as an example of the need for such a vehicle, as it would provide cover in exposed areas — where many recent violent crimes have taken place — for ERT members responding to various emergencies. Additionally, having a vehicle in the county would eliminate the wait time on the regional resource, which can sometimes be up to three hours.

“We’re asking those guys to do some, I don’t want to say crazy stuff, but extremely dangerous stuff, to protect the public. This is an asset that we must have in order to give us the confidence to be able to mitigate things faster and keep us safe,” Huntley said. “I can’t keep my guys safe. I need my guys safe, and I need the help of everybody to do that.”