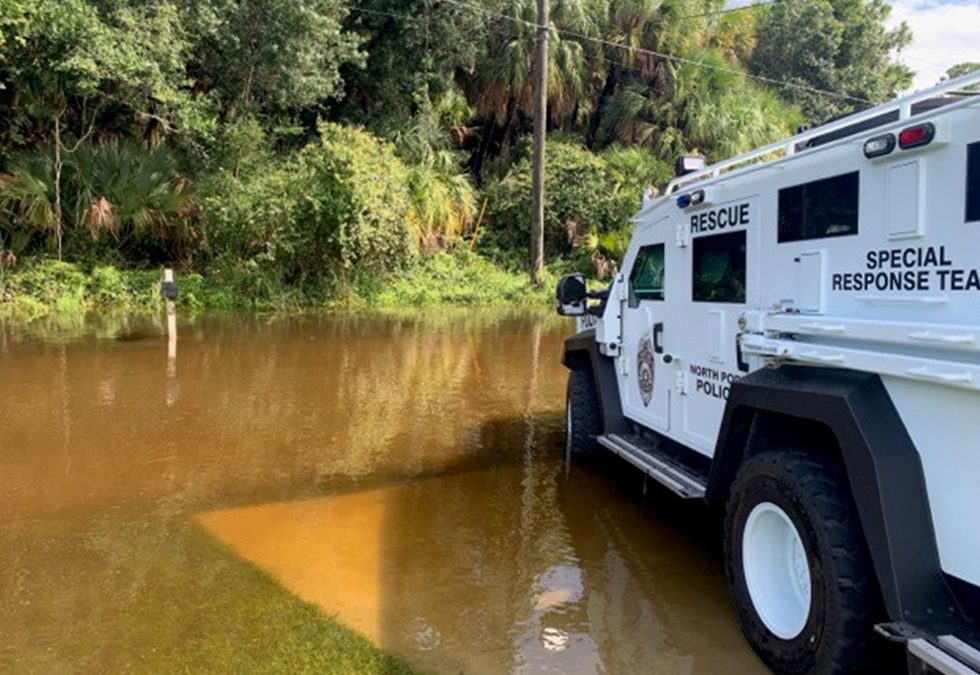 The North Port Police Department (NPPD) in Florida is praising their BearCat® G3 as a vital tool for recent water rescue missions following Hurricane Elsa. When the storm made land in southern Florida last week, it hit the city of North Port hard, dumping around 10 inches of rain in a single night. The situation only worsened as excess stormwater flowed into the community from more rural areas, flooding streets and forcing evacuations. When faced with the prospect of hurricane water rescues, NPPD quickly turned to their BearCat G3 to ensure residents were brought safely to dry land.

With the add-on water fording kit, the department’s BearCat allows officers to travel through up to 40 inches of water and navigate streets that have essentially been turned into rivers. This feature proved valuable when police were called in to rescue a special needs child who had been landlocked by the rising waters. Officers were able to safely reach and deliver the child to a local facility.

The BearCat G3 is also equipped with off-road tires, wheels and run flats that allow it to navigate an array of rugged off-road environments. Its increased ground clearance and robust suspension allows for emergency response during natural disaster scenarios that would render standard vehicles ineffective.

While the BearCat has rightfully earned its reputation for being the go-to armored vehicle for police and special operations units, it’s also a premier life-saving emergency response vehicle, as evidenced in North Port.

The 2021 hurricane season is far from over, and it’s expected to be another active year for major storms. If your mission takes you off-road or through areas expected to be impacted by hurricanes or flooding, the Lenco BearCat G3 will safely get you where you need to go. Contact us today to learn more about the G3 or any of our other response and rescue vehicles.