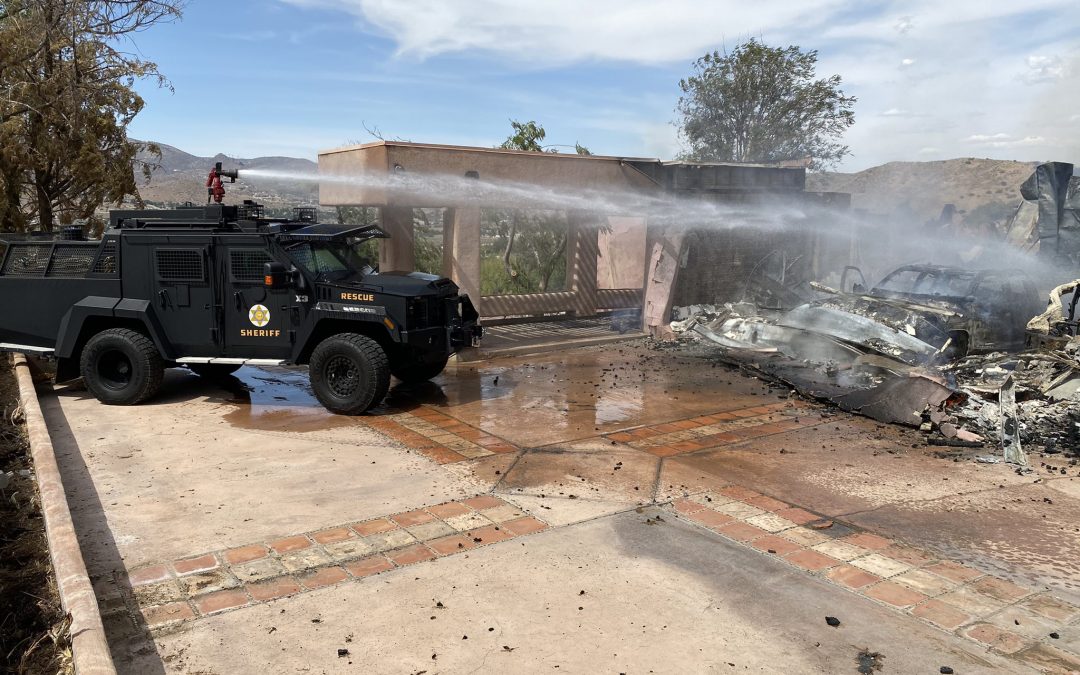 A Lenco Armored Vehicles BearCat® X3 FireCat is being credited with helping to put out a fire in Agua Dulce, California earlier this month when it was too dangerous for firefighters to approach the scene using traditional means. Deputies from the Los Angeles Sheriff’s Department Special Enforcement Bureau (LASD SEB) were called in with their recently acquired Lenco FireCat when an armed suspect lit his own home on fire, raising concerns that gunfire and flames could threaten the residential neighborhood. The new Lenco X3 FireCat, with its armor protection and water deployment capabilities, allowed first responders to safely approach and extinguish the flames.

“This is a prime example […] where we can use some new technology to safely handle some of these very volatile incidents and protect the neighborhood. That’s the key—to protect the community,” said Chief Jack Ewell of the LASD Special Operations Division.

The incident began earlier in the day at Los Angeles County Fire Department Station 81, when an off-duty firefighter shot two of his coworkers, killing one, then returned to his nearby home and set it on fire. Due to the earlier shooting, it was unsafe for firefighters to approach the residence, leading the Los Angeles County Sheriff’s Department to call in their FireCat. The responders used a roof-mounted nozzle and drew water from a 300-gallon onboard water tank to extinguish the flames before they could spread to nearby homes or brush, avoiding casualties and property damage.

“We’re proud that our vehicle was able to help defuse this dangerous situation, protecting both firefighters and deputies from further harm,” expressed Lenny Light, Lenco Armored Vehicles vice president. “The use of this vehicle is just the latest example in the continued trust LASD SEB has placed in us.”

The X3 FireCat includes many of the same standard features of the BearCat: ruggedized chassis and suspension components, high ballistic protection and a rotating rescue hatch. The design and capabilities of the X3 FireCat allow tactical teams to respond to the scene of an incident and extinguish flames before they escalate and cause large-scale property damage. In addition, the FireCat’s versatility makes it an ideal regional asset, which is precisely what Prince George’s County has implemented between police and fire departments.