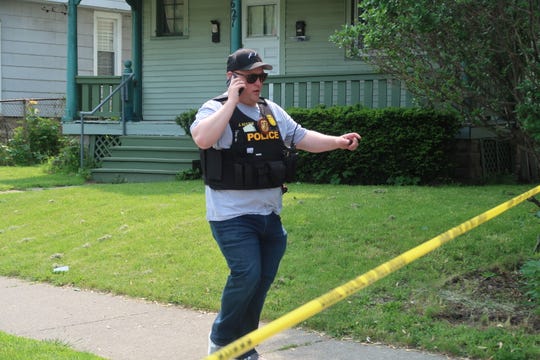 ROCHESTER – Police officers tried to coax an armed suspect out of a home near the Rochester Public Market for four hours Saturday.

But the man, later identified as Keith Williams, didn’t come out of the home until he saw the Rochester Police Department SWAT team assembling.

Williams eventually came out of the Peck Street home when the SWAT team BearCat armored vehicle arrived on North Goodman Street. That compelled him to come out of the home without incident or injury, Rochester Police Capt. Frank Umbrino said.

“We had the big BearCat that pulled up in front of the house and the suspect finally made a good decision and decided to come out of the house,” Umbrino said.

Williams, 27, was identified as the suspect in Thursday’s shooting outside 720 N. Goodman St., Umbrino said.

At 11:20 a.m. Saturday, a person who knew Williams was suspected in that shooting called 911 after seeing him near 37 Peck St. Umbrino said Williams menaced the caller with a gun.

Officers were called to the home for the report of a wanted suspect with a gun.

Instead, Umbrino said the Williams was inside the home with another person. Again, Umbrino declined to provide specifics. He wouldn’t say if the other person was related to the suspect or if either person lived in the home.

Umbrino said the second person in the home came outside about two hours into the incident. “We have no reason to believe that the (second) person was being held against their will,” Umbrino added.

Police shut down North Goodman Street between Garson Avenue and Fair Place during the incident. Officers utilized a negotiator and call-outs over a loud speaker to coax the Williams out of the home.

Williams finally came out of the home around 3:30 p.m., Umbrino said.

RPD was assisted at the scene by the New York State Police and the Rochester Fire Department.

Umbrino said authorities would be executing a search warrant at the home after it was cleared.

Rochester police responded to 720 N. Goodman St. around 9 p.m. Thursday for the report of a person shot outside. That scene is roughly three blocks north of the Peck Street home.

Officers found a 28-year-old Rochester man with a gunshot wound to his upper body. He was transported to Strong Memorial Hospital by American Medical Response, where doctors reported that his injuries were not considered life-threatening.