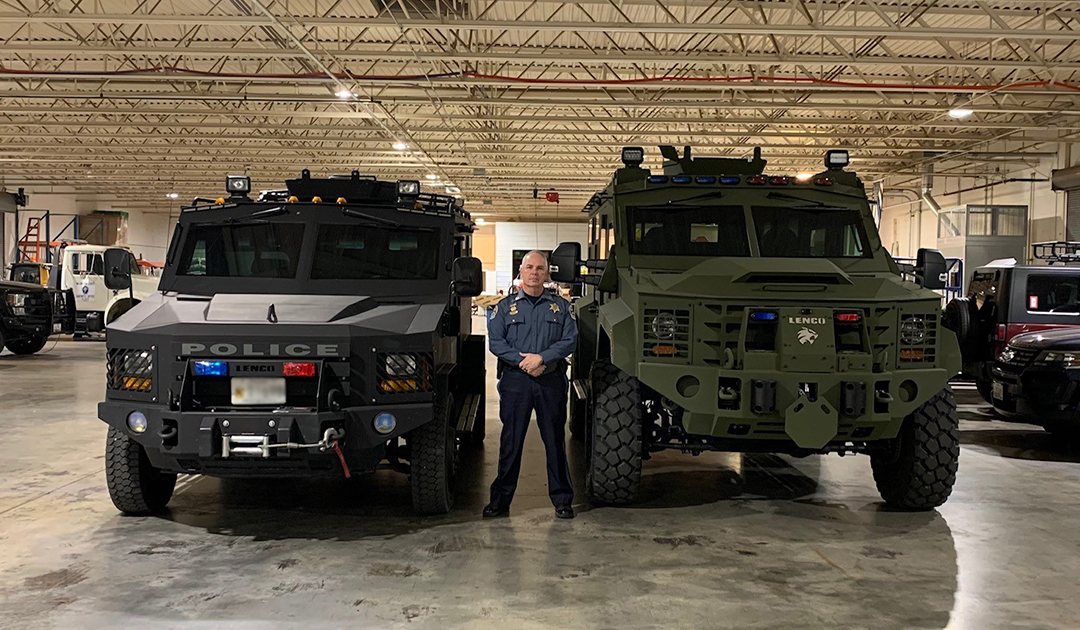 Using funding from the Homeland Security Grant Program, the Washington County Sheriff’s Office acquired a BearCat G2 in 2006. Prior to the purchase, the team was using an old military Dragoon that required an escort each time it was put into use. Chosen for its ballistic protection and off-road capabilities, the BearCat was a more functional and reliable vehicle option. Working closely with Jim Massery to customize the vehicle, Captain Knight and his team flew to Pittsfield to inspect it and tour the facility before putting the G2 into operation in February 2006.

Less than a year later, on December 19, 2007, they discovered just how valuable of a tool the BearCat really is.

The team was called out to a homicide in a residential neighborhood. The suspect had murdered his girlfriend and shot and killed a Smithsburg police officer. He was located in a rural area east of Smithsburg, Maryland in a Chevy pick-up, where he remained, armed with several firearms, which were fired at responding officers.

“We never would have been able to get the other [Dragoon] vehicle to the scene. It was a rural town (Smithsburg, MD) east of Hagerstown. We also wouldn’t have been able to get the personnel we required to the scene. It [the Dragoon] wouldn’t have accommodated the number of people. [Without the BearCat], we would have had people in patrol cars in gunfire without armored protection. Numerous other agencies who arrived in patrol cars were hit with gunfire.”

Ultimately, the responding officers safely made contact with the suspect and were able to disable his vehicle by ramming his Chevrolet pick-up with the BearCat G2. He fired multiple shots at the responding officers—the BearCat took two shotgun rounds to the passenger window which shattered but remained intact. In addition, it also took a 12-gauge rifle slug to the “A” pillar.

“The shots didn’t defeat the armor or glass; we were still able to be in the fight. Whoever would have been hit [if not for the BeartCat]—the driver, the passenger, the team commander—probably would have been killed also. We were able to take the suspect’s vehicle out of the fight.”

The suspect was taken into custody after being shot several times and eventually pled guilty to two counts of 1st Degree Murder and several counts of attempted murder.  He is currently serving out his sentence in a Maryland State Prison.

“The first thing I did after the incident was to call Jim. What an amazing vehicle. It [the BearCat] saved the lives of police officers that day. We can protect the citizens of Washington County because we have this truck. It’s a tool in our toolbox. Without it, things could have been a whole lot worse.”

After the incident, the truck was returned to Lenco where it was repaired. Once returned to Maryland, it was put back into operation and it has been ever since.

When funds again became available in 2020, Knight once more turned to Lenco for a BearCat. This time he worked with Jim and Carrie, both of whom handled product and delivery questions.

“After our first BearCat purchase, we never thought to purchase another type of vehicle. With Lenco being our sole-source provider, we didn’t have to look elsewhere, nor would we. It was almost a repeat purchase. The two vehicles are very similar. This time, we opted for an upgraded off-road package with bigger tires and a hydraulic ram.”

“I can’t say enough good things about Lenco. After our first BearCat purchase, we never thought to purchase another type of vehicle. With Lenco being our sole-source provider, we didn’t have to look elsewhere, nor would we.”

On whether Captain Mark Knight would recommend a BearCat to others

“I don’t know why every agency with a SWAT team doesn’t have one. It’d be almost like not giving an officer a firearm or body armor.”

“Jim Massery was who we dealt with in 2006 and who we still deal with today. He is very accommodating, very helpful. He answers all the questions we might have. When we received our second BearCat, the truck driver who delivered our BearCat was just as excited to deliver it as we were to receive it.”